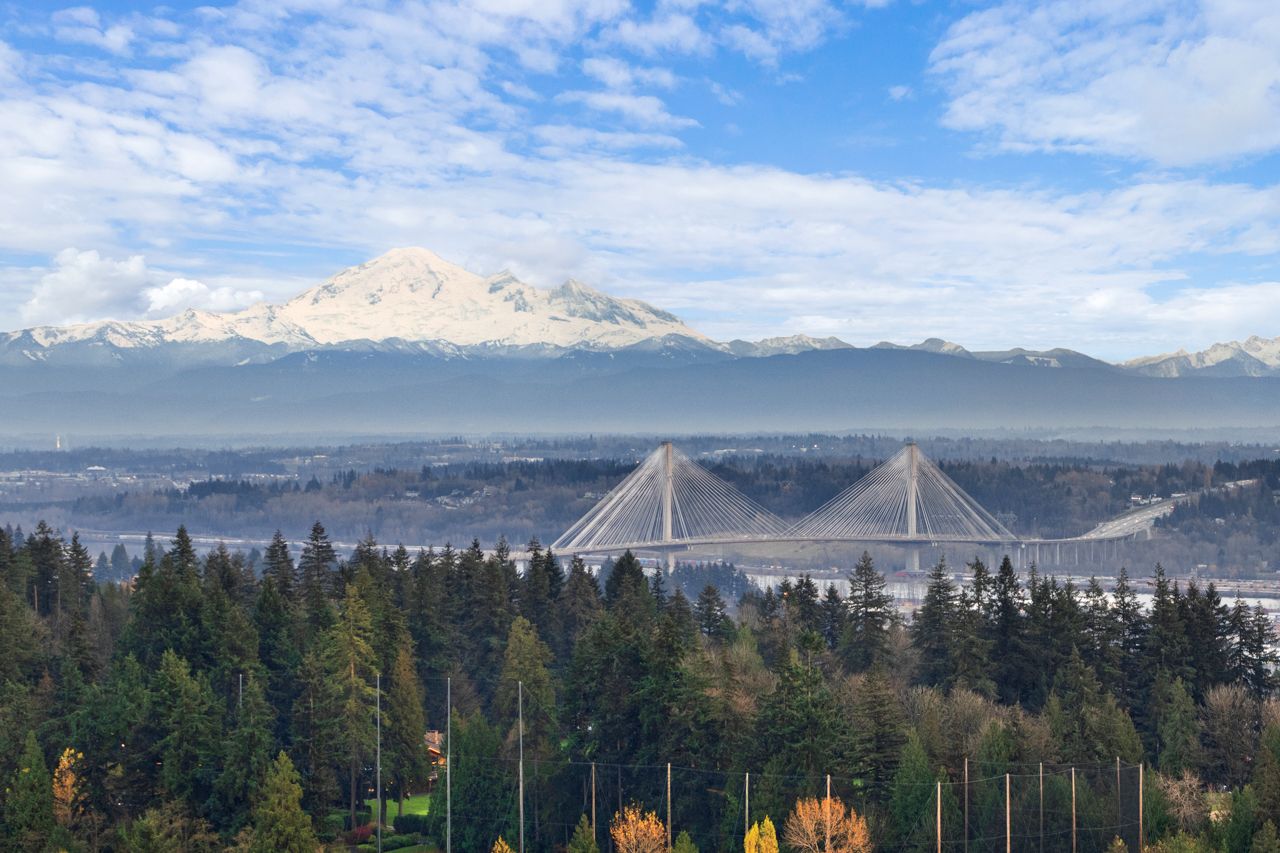 Coquitlam's geographic shape can be thought of as a tilted hourglass, with two larger parcels of land with a smaller central section connecting them.

Southwest Coquitlam comprises the original core of the city, with Maillardville and Fraser River industrial sector giving way to the large residential areas of Austin Heights, colloquially referred to as "The Bump"[citation needed] due to its high and flat plateau topography. These older residences, with larger property dimensions, are increasingly being torn down and replaced with newer and larger homes. The Poirier Street area was the city's original recreational centre with the Coquitlam Sports Centre, Chimo Aquatic and Fitness Centre, and sports fields located there, while City Hall was previously located further south in Maillardville.[16]

The Austin Heights area contains Como Lake, a renowned urban fishing and recreation area, and headwaters for the Como watershed. The watershed represents one of the last urban watersheds in the Tri-Cities that supports wild stocks of coho salmon as well as other species at risk such as coastal cutthroat trout (both sea-run and resident) and bird species such as the great blue heron and green heron.[17] It also contains Mundy Park, one of the largest urban parks in the Metro Vancouver area.

In 1984, the provincial government sold 57 hectares (141 acres) formerly attached to Riverview Hospital to Molnar Developments. Shortly afterward, this land was subdivided and became Riverview Heights, with about 250 single family homes. The remaining 240 acres (0.97 km2) of this still-active mental health facility has been the subject of much controversy between developers, environmentalists, and conservationists. In 2005, the city's task force on the hospital lands rejected the idea of further housing on the lands and declared that the lands and buildings should be protected and remain as a mental health facility.[18]

Coquitlam Town Centre, was designated as a "Regional Town Centre" under the Metro Vancouver's Livable Region Strategic Plan. The concept of a town centre for the area dates back to 1975, and is intended to have a high concentration of high-density housing, offices, cultural, entertainment and education facilities to serve major growth areas of the region, served by rapid transit service.[16] It is in the town centre that many public buildings can be found, including City Hall, a branch of the Coquitlam Public Library, R.C.M.P. station, Coquitlam's main fire hall, the David Lam Campus of Douglas College, the Evergreen Cultural Centre, City Centre Aquatic Complex, Town Centre Park and Percy Perry Stadium. Coquitlam Town Centre is currently undergoing an update of the Town Centre plan.[19]

In 1989, the provincial government sold 570 hectares (1,409 acres) of second-growth forested land on the south slope of Eagle Mountain, known locally as Eagle Ridge, to developer Wesbild. This resulted in the closure of Westwood Motorsport Park in 1990, and the creation of Westwood Plateau, which was developed into 4,525 upscale homes, as well as two golf courses.[20][21]

With development on Westwood Plateau completed and the opening of the David Avenue Connector in 2006, Coquitlam's primary urban development has now shifted to Burke Mountain in the northeastern portion of the city.[22][23][24]